Land Grabbing on PEI: How the Lands Protection Act is being violated and why Islanders should be concerned: Saturday, February 23 from 1:30 to 4:00 pm at the PEI Farm Centre. Hosted by the Coalitions for the Protection of PEI Land and Water. 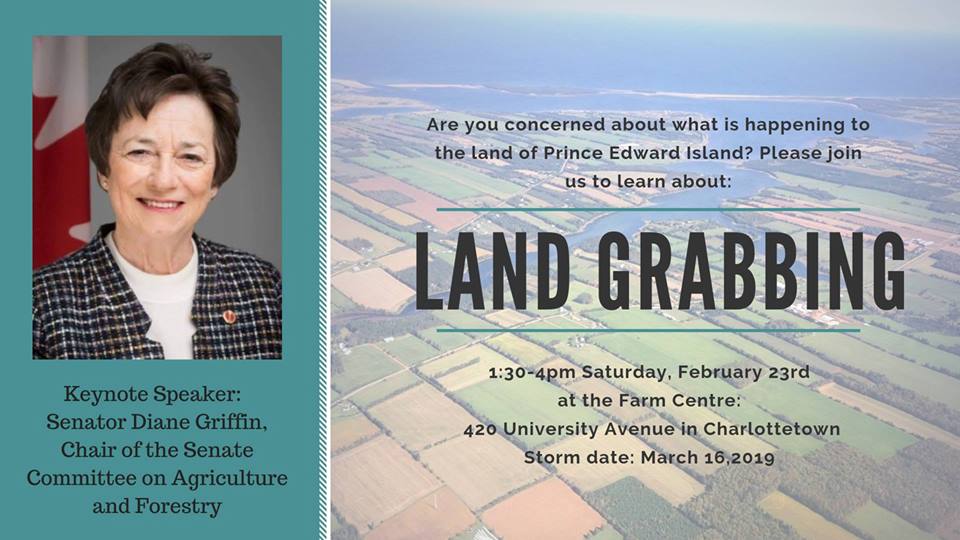 The Coalition for the Protection of PEI Land with support from the Coalition for the Protection of PEI Water will host a forum entitled ‘Land Grabbing on PEI: How the Lands Protection Act is being violated and why Islanders should be concerned’, on Saturday, February 23rd at the Farm Centre, 420 University Avenue in Charlottetown from 1:30-4pm. Storm date: March 16,2019.
Senator Diane Griffin, chair of the Senate Committee on Agriculture and Forestry, will lead a panel of presenters with a summary of her research on land grabbing and speculation in Canada and beyond. Other panelists include Douglas Campbell, District Director for the National Farmers Union on PEI and Island writer, Ian Petrie, who is well-known for his thoughtful analyses on PEI farming issues.
The Coalition for the Protection of PEI Land was formed last spring by a group of concerned islanders from a diverse range of backgrounds. The purpose of the Coalition is to promote steadfast stewardship, respecting the spirit of the PEI Lands Protection Act, for the protection of Prince Edward Island’s fragile ecology, environment, watersheds and lands. Given the current trend of accumulation of land by corporate interests, the coalition will first address deficiencies in the PEI Lands Protection Act (in the Act itself, and in the way it is being implemented) that undermine its purpose, spirit and intent.
Coalition founder,Marie Burge, describes the purpose of the group like this:”Community organizations and individuals came together in early 2018 to form the Coalition for the Protection of PEI Lands as a support for the many Islanders who are deeply concerned about the land. The people see that the control of the land is in fewer and fewer hands. They are concerned about any further consolidation of land and about how land is being used and often abused. The Coalition encourages more people to speak out for the protection of PEI lands.”
Following presentations by the panelists, there will be a short Q&A and then participants will be asked to help contribute to possible solutions. This forum will be relevant to any islander who is concerned about preserving PEI land for now and into the future.
Contact: Marie Burge 902-894-4573