Let us MOVE together for Justice

The whole world celebrates International Migrants Day today. On December 18, 1990 the UN General Assembly signed and adopted the International Convention on the Protection of the Rights of All Migrant Workers and Members of Their Families. 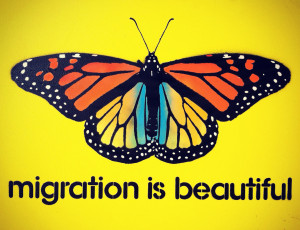 Today, exactly 25 years later Canada, an active recruiter of migrant workers, has still not signed this covenant. As of 2013, there were over 176, 613 temporary foreign workers; 284, 050 international mobility program workers, and hundreds of thousands of migrants on other work permits living and working here precariously.

On this day, and every day, we call upon the new Federal government to address the core issues that migrant workers face. It is time for Mobility, Voice and Equality for Migrant Workers.

Sign the Petition! Let’s work together to ensure justice.

We are the Coalition for Migrant Workers Rights – Canada (CMWRC), a historic coalition of organizations representing Canadian born and migrant worker groups from coast to coast to coast. We are calling on the Federal government to end the discriminatory practice of tying migrant workers to specific employers and transition towards permanent immigration status upon arrival for migrant workers.

Migrant workers, many of them deemed low-skilled, in the Temporary Foreign Workers Program (TFWP) come at the request of specific employers, and are attached to them for the duration of their stay in Canada. They cannot easily change jobs or remain in the country if they are unemployed. Most migrant workers are denied permanent residency and are pushed out by a revolving door immigration system.

The use of labour brokers or recruitment agencies has led to the proliferation of operators who exploit migrant worker for their profit. Brokers are largely unregulated, and charge exorbitant fees for placement in jobs that sometimes don’t even exist.

Federal immigration laws that create temporariness are exacerbated by provincial labour and social entitlement laws that shut migrant workers out from basic protections. As a result, migrant workers live in constant precarity.

This shift towards increased temporary worker programs over the last decade is part of a much longer historical trend towards temporariness. 2016 will be the 50th year of the Seasonal Agricultural Workers Program and over 40 years since the current form of the Caregivers program came into force. This temporariness has created a massive divide between citizens with rights, and the rest, temporary and non-status, largely racialized and low-waged workers.

We also know that the struggles for migrant worker rights in Canada cannot be separated from the struggle against displacement. Migration, in its current form, is still very much a product of underdevelopment. Poverty, unemployment, political conflict and general displacement of peoples including displacement due to environmental factors. Thus, justice for migrants includes ensuring an end to wars and war profiteering, economic free trade agreements, and ecological and environmental degradation that Canadian corporations are complicit in abroad. It requires recognition and honoring of Indigenous self-determination here at home.

This December 18th, let us commit to moving as one to make our dreams of justice a reality.

MoVE is a Campaign for Mobility, Voice and Equality for Migrant Workers